Save River-Dipped Phones with DryBox 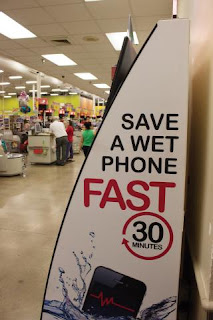 A new technology that has been rolled out in San Marcos claims to save phones that have gotten submerged in water, The University Star reports.
The machine has been leasing a space in HEB since April, one of only 12 in the state.  The technology was created by an engineer after his wife’s phone was dropped in water and he couldn’t get it working again.
DryBox will remove liquid from devices in 30 minutes while the owner shops.  The company says the machine is successful more than 70 percent of the time if used within 24 hours of the device’s exposure to moisture.
Factors that influence DryBox’s likelihood of success include how long the device was exposed to liquid.  Owners shouldn’t try to turn on the device or plug it into an electrical source after it has been exposed to moisture.
Ready to find a new #apartment in San Marcos?  Give San Marcos Apartment Experts a call today at 512-805-0123.