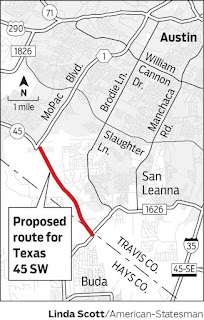 The 45 Southwest Tollway, which would connect northern Hays county and MoPac, has been talked about for years.  Public discussion on a study of the traffic patterns building the roadway would cause was supposed to occur last week.  However, the study’s veracity has been called into question, Statesman.com reports.
The Capital Area Metropolitan Planning Organization, (CAMPO), was set to vote in October on pulling plans for Texas 45 Southwest out of the area’s long-range transportation plan, but now that the population figures used for the study seem to be flawed, it’s unlikely that vote will occur.  The study was supposed to prove whether the relief to traffic on Brodie and Slaughter Lane would be worth the cost and the possible contamination to the Edwards Aquifer under the area.
Hays County commissions proposed bringing $5 million towards a $22 million two or three-lane, free Texas 45 Southwest project, with Travis County providing the rest.  The other option is a tolled four-lane road that would cost upwards of $90 million and would be built and operated by the Central Texas Regional Mobility Authority.  Currently, a $5 million environmental study, funded by TxDOT, is underway to examine all options, including building no road at all.  That study isn’t expected to be completed for four more years.
Austin City council has also removed the road from their “Imagine Austin” plan.  The traffic study is expected to take two months to redo, which would make it not ready for the October meeting when the CAMPO vote was supposed to take place.
Looking for a great Austin apartment so close to your work you don’t have to worry about hypothetical roads?  Call Apartment Experts South today!